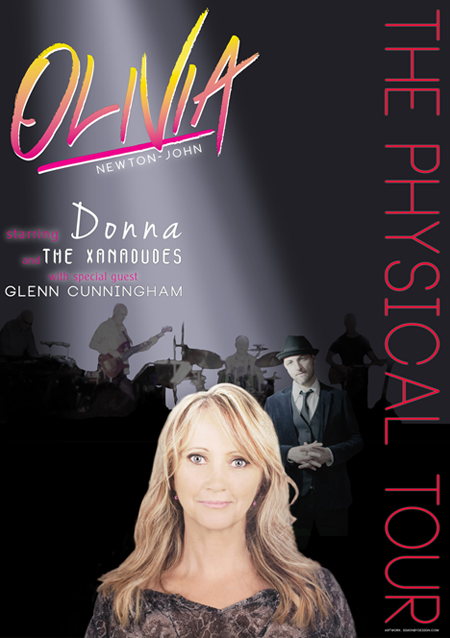 OLIVIA – The Physical Tour is a stunning live concert experience audiences won’t want to miss. Featured songs include Xanadu, Hopelessly Devoted To You, Physical, Let Me Be There, Suddenly, I Honestly Love You, You’re The One That I Want, and many more. Aussie icon Olivia Newton-John has sold over 100 million records, making her one of the world’s best-selling music artists of all time. In 1982 while at the height of her career, Olivia released her ground-breaking album PHYSICAL, following it up with a World Tour so loved by her fans, that it remains her most popular to this day.

DONNA
Join multi-award winning, international touring artist Donna (formerly Donna Boyd) for an electrifying night of music and fun, as she and her band The XanaDudes create a musical tribute to Olivia Newton-John’s record breaking Physical World Tour Concert. Donna has paid musical tribute to Olivia on stages in Australia and America, both on cruise ships and in Las Vegas, where audiences said the vocal similarities were astonishing.

GLENN CUNNINGHAM
Joining Donna on stage is Delta Goodrem’s former backing singer Glenn Cunningham. A Finalist in THE VOICE AUSTRALIA, Glenn is an accomplished singer-songwriter in his own right, who has written, produced and toured with Jimmy Barnes, Delta, Tina Arena, John Farnham, Brian McFadden, Human Nature, Guy Sebastian and the list goes on…

DONNA and GLENN come together on stage to deliver their spine tingling version of Suddenly, the duet from Xanadu, and of course a rocking version of You’re The One That I Want from GREASE! You seriously don’t want to miss this!

THE XANADUDES
Donna and Glenn are backed by The XanaDudes – a 4 piece band of professional musicians in their own right, who have worked with recording artists (Tina Arena, Glenn Shorrock etc) as well as internationally touring stage shows. The XanaDudes have worked tirelessly to recreate the sounds from the original recordings, giving audiences an incredible live experience. Audiences will love this high energy, vibrant show featuring the hits of a career spanning decades, which covers many different musical styles from OLIVIA’s Country Music hits of the early ‘70s, to her ‘80s rock success, as well as chart topping songs from the movie musicals Grease and Xanadu. Prizes are given to the winners of the audience participation segment “Olivia Trivia”.