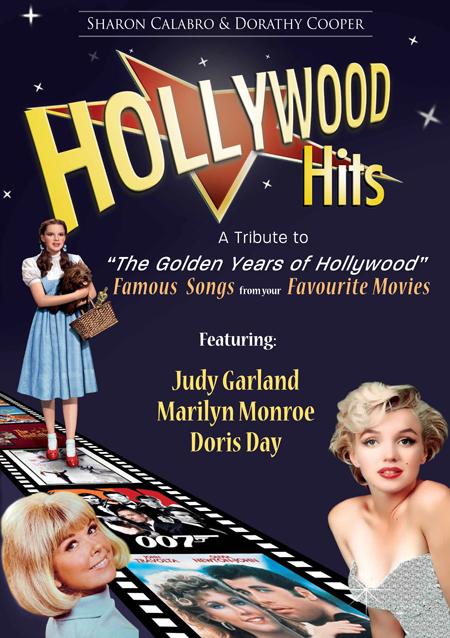 “The Golden Years of Hollywood” – A Musical Journey

HOLLYWOOD HITS takes you on a musical journey through movies music history from the 1930’s decade. “The Golden Years of Hollywood” to today’s modern movie creations.

Welcome to a visual song and dance sensation of movie music themes. Every era has so many famous movie themes that it is impossible to include them all in one show. HOLLYWOOD HITS is an evolving show that’s music will change to be able to showcase as many movies as possible. So you will be able to see something fresh the next time you see it.

Classic songs like “Somewhere Over the Rainbow”, “As Time Goes By”, ”Unchained Melody”, “Diamonds Are a Girl’s Best Friend” and many more, plus memorable movie moments performed by the best in the business who have been entertaining audiences all over the world for many years.Together, they bring ‘HOLLYWOOD HITS’ to life.

SHARON CALABRO
A versatile entertainer who has her own successful cabaret show as well as touring nationally, supporting great artists such as; Doug Parkinson, Al Martino, Kamahl, Max Bygraves, Dr Hook, The Four Kinsmen, The Ink Spots, Johnny Tillitson and Jade Hurley to name a few. Sharon has appeared on a number of national television shows including; HEY HEY IT’S SATURDAY, IN SYDNEY TODAY and THE JOHN MANGOS SHOW. She has performed many times on International Cruise ships in England and throughout Europe

and has had the privilege of singing the Australian national Anthem for Australian and European Television. Her vibrant freshness has earned her two MO AWARD nominations.

Sharon not only sings, but dances and is also an accomplished percussionist. Sharon is currently working in the club scene with her own song and dance show in English and Italian. She is a big favourite at the Italian Festivals throughout Australia. A truly talented entertainer.

DORATHY COOPER
Dorathy Cooper is a dynamic versatile performer with a pure natural voice and a warm friendly personality that shines through. Dorathy is able to sing many styles such as Jazz, Contemporary,Country, Rock, musical theatre and the great songs of the 20’s – 40’s. She has performed worldwide and throughout the NSW club circuit with her own show and also supporting performers like – “Simon Gallagher”, “Jade Hurley”, “Herman’s Hermits” “Kamahl”, “Barry Crocker”, “Marty Rhone”, “John Rowles”, “The Four Kinsmen” “Lucky Star” and many more.

Dorathy has appeared on National television shows such as “Bert Newton’s Midday Show”, “The Mike Walsh Midday Show” and “John Mangos Morning Show”. You will also hear Dorathy’s voice on many radio and television jingles today. She has always been a regular performer on cruise ships and cruising more recently has introduced her to a non-English speaking audience where she has learnt to sing in Japanese and Italian.

As one of the most respected freelance vocalists in Sydney, Dorathy has been hired to work with shows such as: “Farnham and Jones”, “Boyz from Oz”, ”Neil Diamond Experience” “Grease is the Word”, “Abbalanche” and many more and most recently “ABBACADABRA”. Her appeal is Universal. She is truly a singer’s singer.

Please click on the link to view promo video:
https://www.youtube.com/watch?v=xyclmQx33rI